I attempted to wake up at a reasonable time but this is me we’re talking about. Breakfast ended at 10am (definitely out of the question), because I definitely woke up at 1.

“So…what are we doing today?”

I wanted to see touristy things (aka the London Eye and Big Ben). What we ended up seeing instead was the London Marathon, a man with a very patriotic hat, and a slew of stone animals.

We were in tourist town. Officially. And the streets were mobbed, not just with tourists, but with the massive crowd from the London Marathon, which seemed to include the entire British population.

Big Ben was undergoing construction the duration of which lasting not one, not two – but four years. Every tour guide was very apologetic and told us to come back. There is the landmark below, in its state of renovation.

As we fought our way through the packed streets, we encountered several interesting entities: Winston Churchill (it was the only statue I recognized) a policeman (I liked his uniform) and a Mickey Mouse balloon (since I’ve worked at Walt Disney World, my former boss holds a special place in my heart). 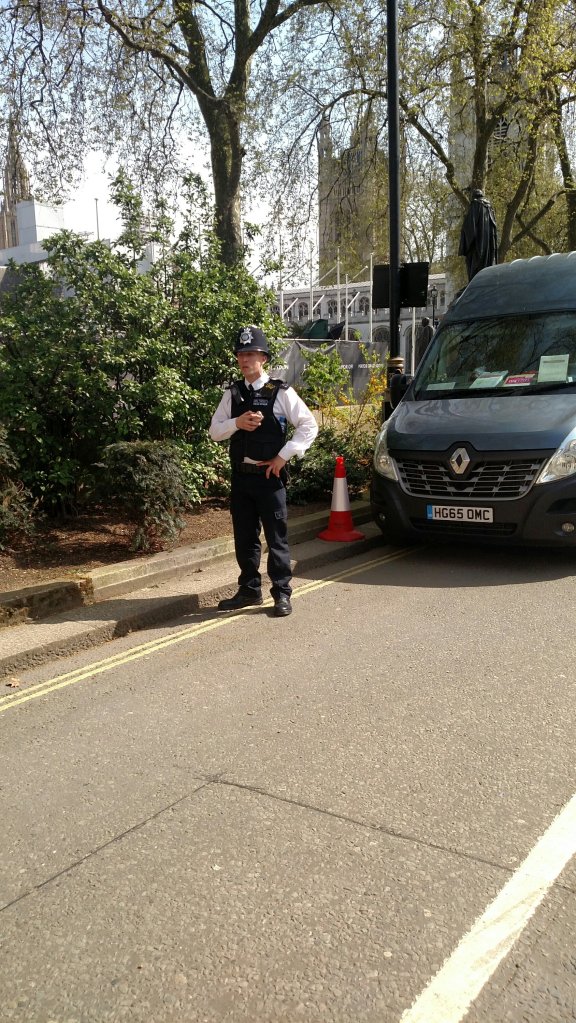 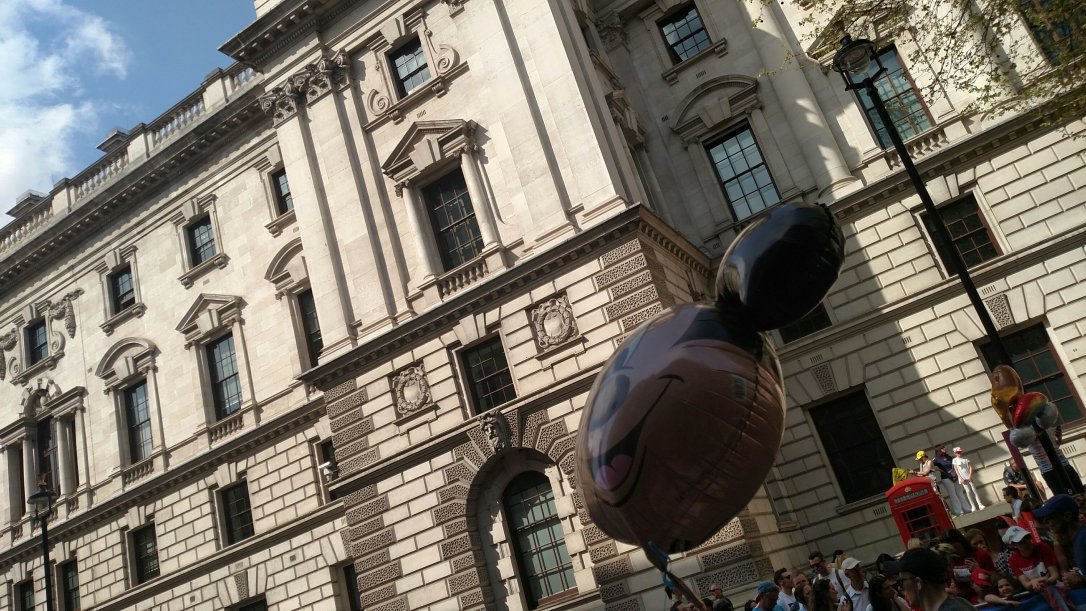 We weren’t trying to burn through all of our money, so we decided to skip riding the London Eye, but Emma did get a posed picture of me in front of it (just as good, right?)

I must confess I don’t actually know what building this is (a church? a secret spy’s headquarters? no idea) but at any rate it looked cool and seemed important.

Below is a pretty groovy wide shot of Westminster – you can catch a glimpse of the London Eye poking out above the lamppost. 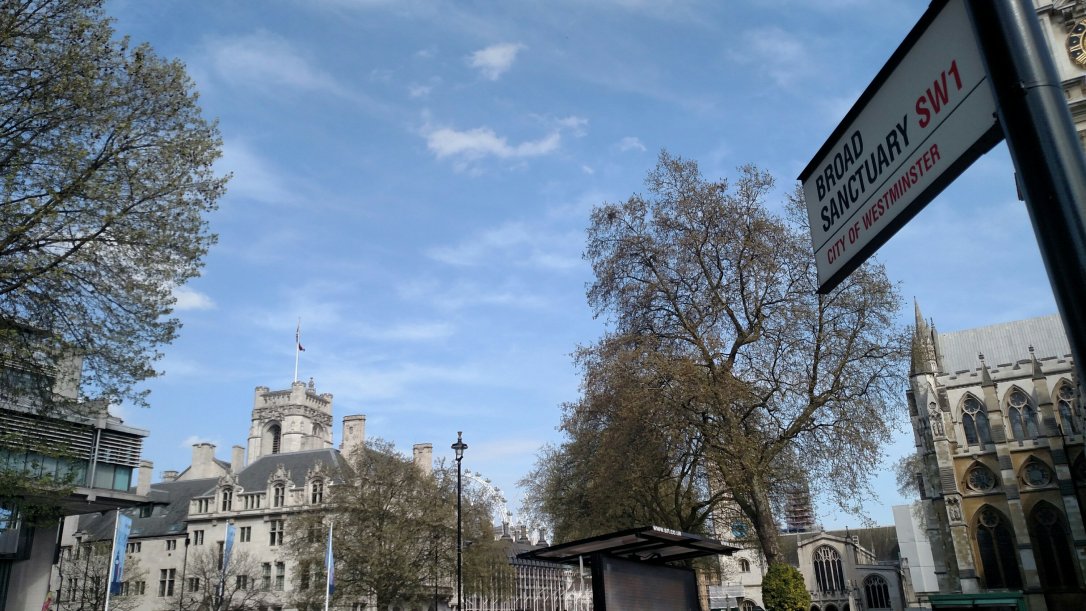 “That ambulance is INSANE! Look at the colors,” I proclaimed to Emma. “Why is it not red? It’s so wild. I definitely have to get a picture of it.” Here it is in all its yellow glory.

“Okay, confession. So as a child, I was reading all the time. Books pretty much raised me. But anyway – the point is – one of my favorites was called 13 Little Blue Envelopes. It’s about this girl, Ginny, who’s never gone anywhere, that is, until her aunt leaves all these envelopes with instructions in each one and she ends up going all over the world. So – and this is the weird part and don’t judge me,” I said. “I wrote down all of my favorite places that Ginny goes. And there was this place called Harrods…”

“Oh, I know Harrods,” said Emma instantly, and without judgment, I might add.

The novel had described Harrods as a kind of posh, gigantic cross between a store and a shopping mall – that sold everything you could possibly imagine (and then some). I was curious how the book would hold up against reality. 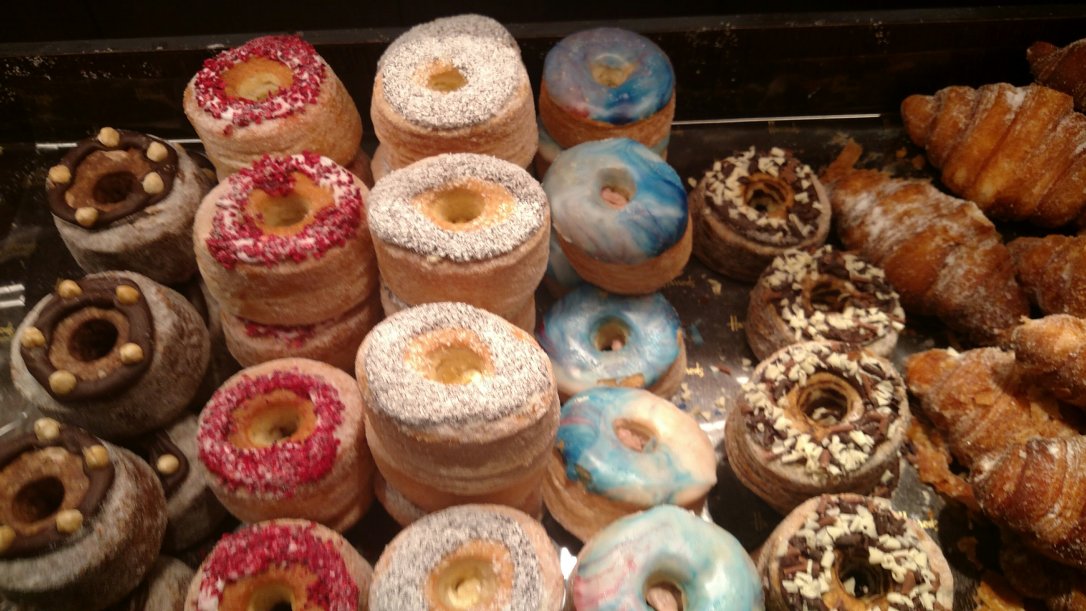 Harrods was a maze. And yes, it really did have literally everything, from chocolate truffles to fancy hats to art galleries, perfumeries, toy kingdoms, you name it – and almost every item with a price tag that made my wallet wilt in my hands. Everything was laughably out of my price range. Even the act of walking around this rich person’s jungle felt out of my price range. 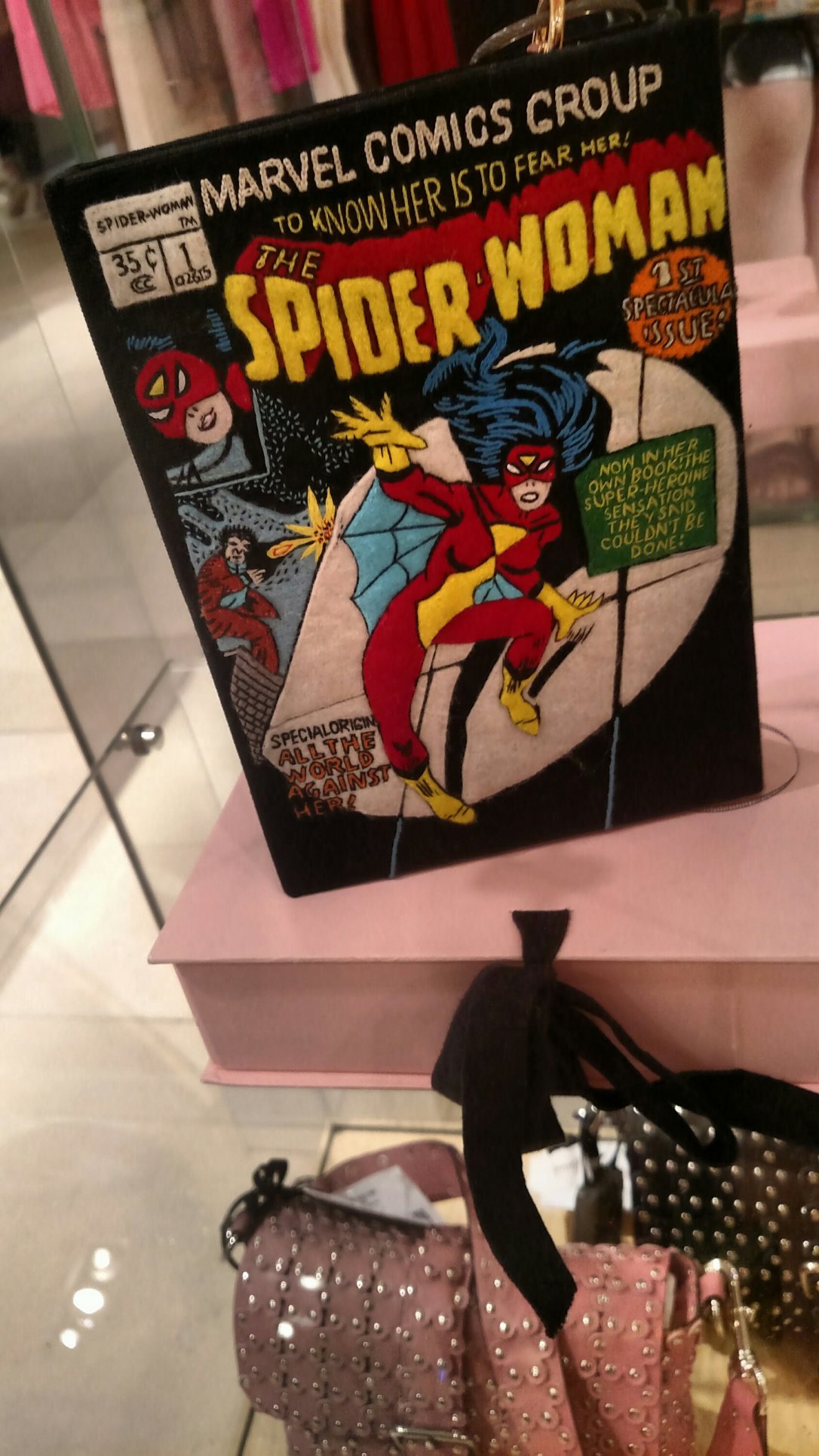 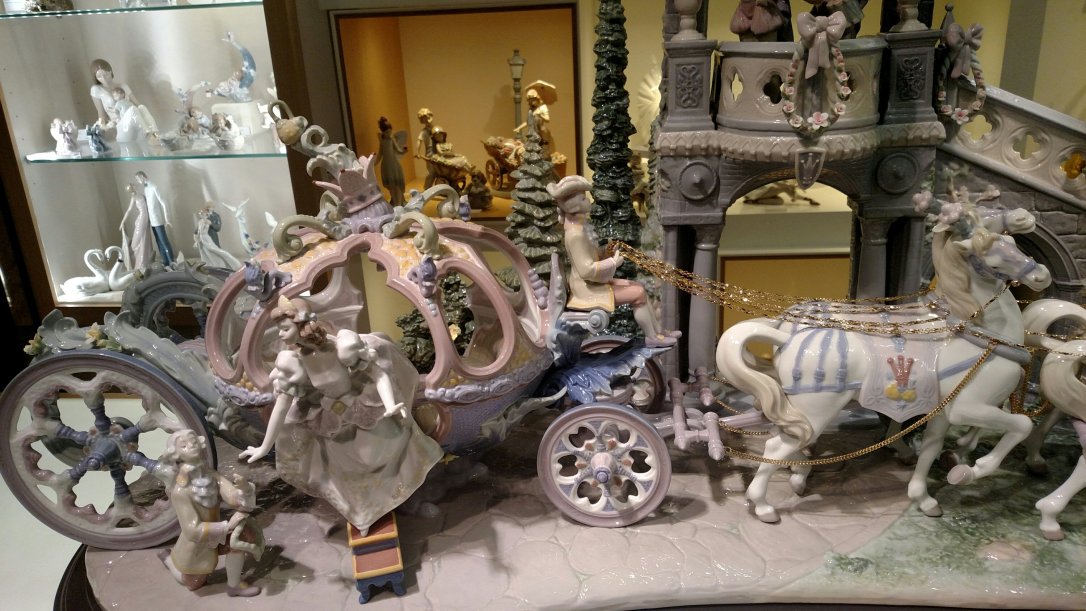 There were giant teddy bears in assorted costumes scattered throughout Harrods, and I made it my personal mission to get a picture with each one of them.

While the novel provided some idea of the variety and enormity of Harrods, it did not allude to the overstimulation of such a place. After about an hour, I turned to Emma. “I don’t know how much more I can take.”

“I know!” she agreed. “It’s room after room of shit I can’t afford. It’s depressing.”

I laughed. “Okay, screw seeing all seven floors. We’ve only gotten through two and I’m burned out. Can you imagine working here?!”

We stopped in front of a directory, which I consulted. “Hmm, okay – let’s check out the toy kingdom and then get out of here?”The toys were cute but, just like everything else in Harrods, horrifically expensive.

“Let’s wander our way to one of those tour buses?” Emma suggested. On the way, we found some interesting moments, spooky trees, and one very pink vehicle. 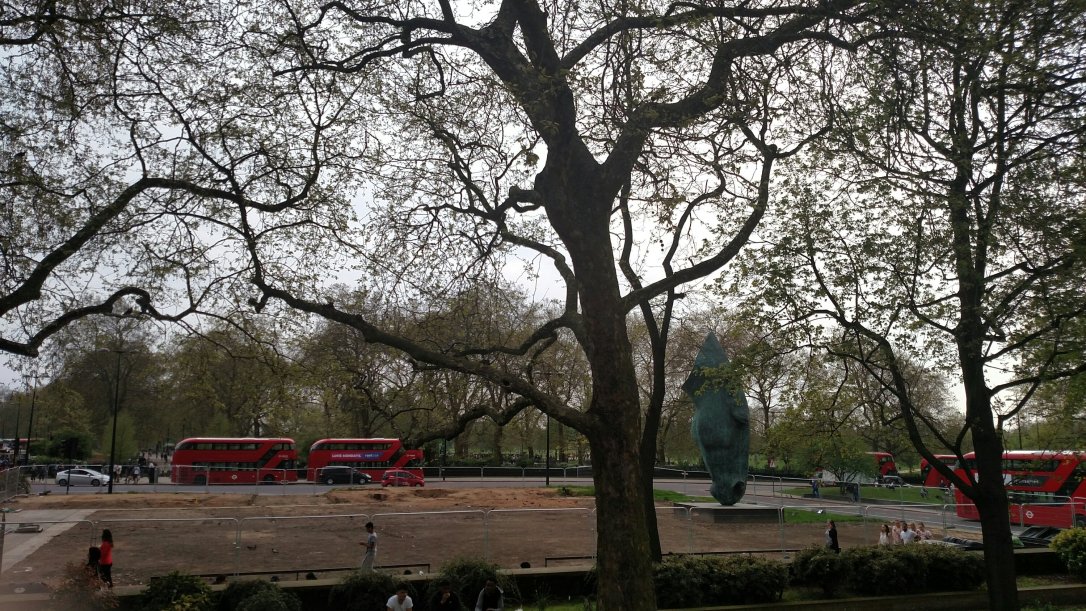 I do find this shot of the tree spooky as shit. Don’t ask me why. And don’t try to tell me it’s not spooky because then the tree will haunt you forever probably because it feels the need to defend its spookiness.

We finally ended up at one of the main loading areas for the tour buses and purchased tickets. “Why did you pick this one?” I asked Emma, as we climbed aboard and headed for the very top. There were at least four or five tour bus companies scattered through London.

“It was the only bus I knew where to get on from.” 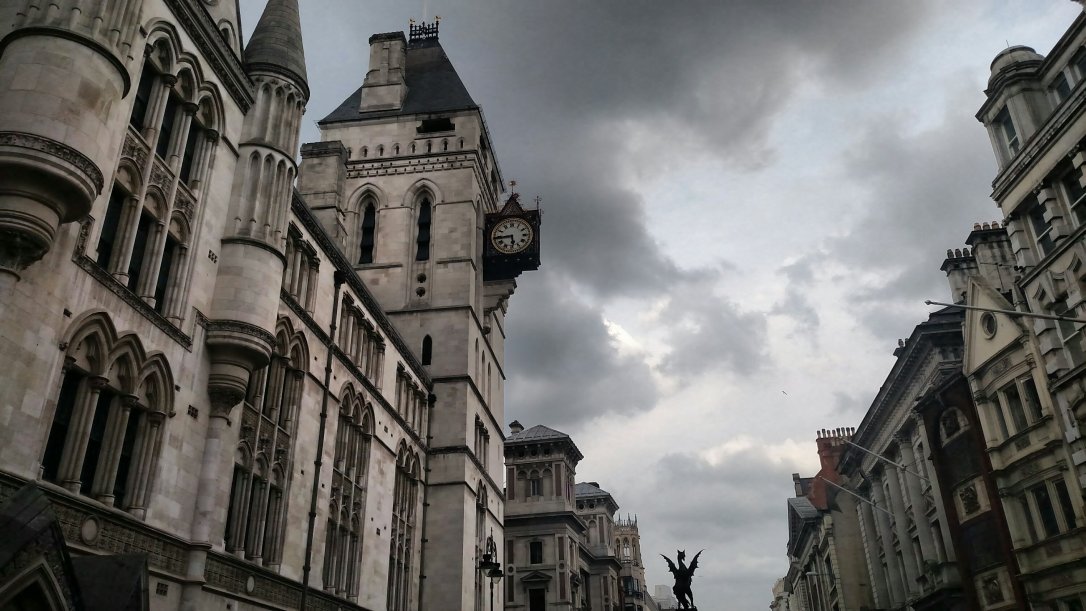 The tour bus was fun but freezing. We were at streetlight level and therefore victim to the full force of the wind. Emma had thought to bring a coat, but sadly I had not been as wise and spent the hour-long trip shivering.

The guide was knowledgeable although hard to hear over the wind. One of my favorite things was the stark and very common contrast of a very old, historical-looking building with a modern storefront mashed on to the bottom of it. 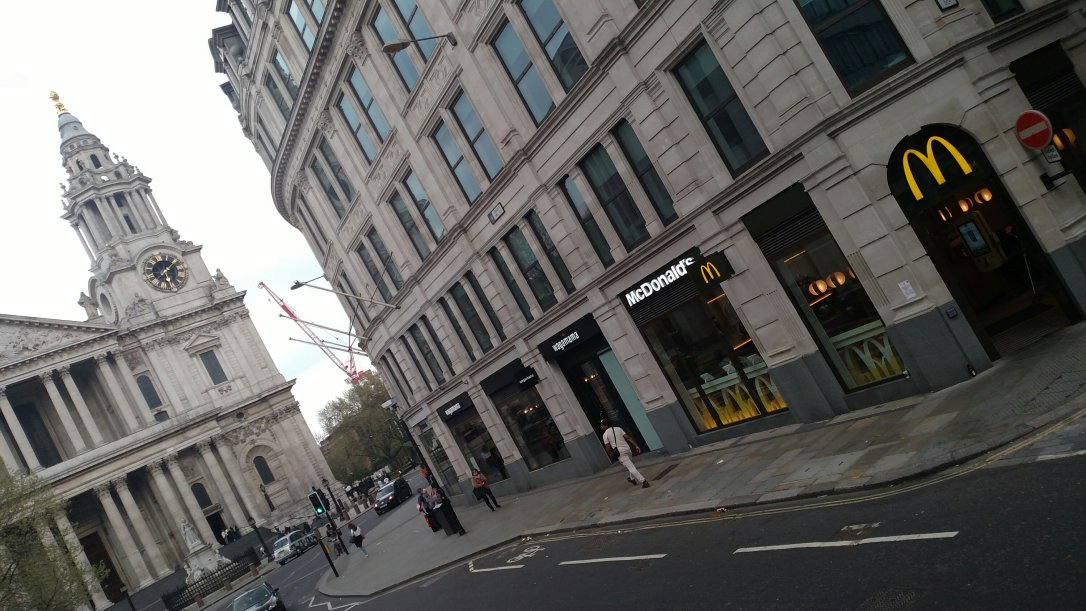 The tour went around the city in loops, so we hopped off at the stop closest to St. Christopher’s Village and headed off for dinner at a nearby Turkish restaurant. I was amused by the crosswalk signs, which gently reminded citizens to “cross with care,” and the strange blue figures (artwork? so random) clinging to the edge of a building high above us. 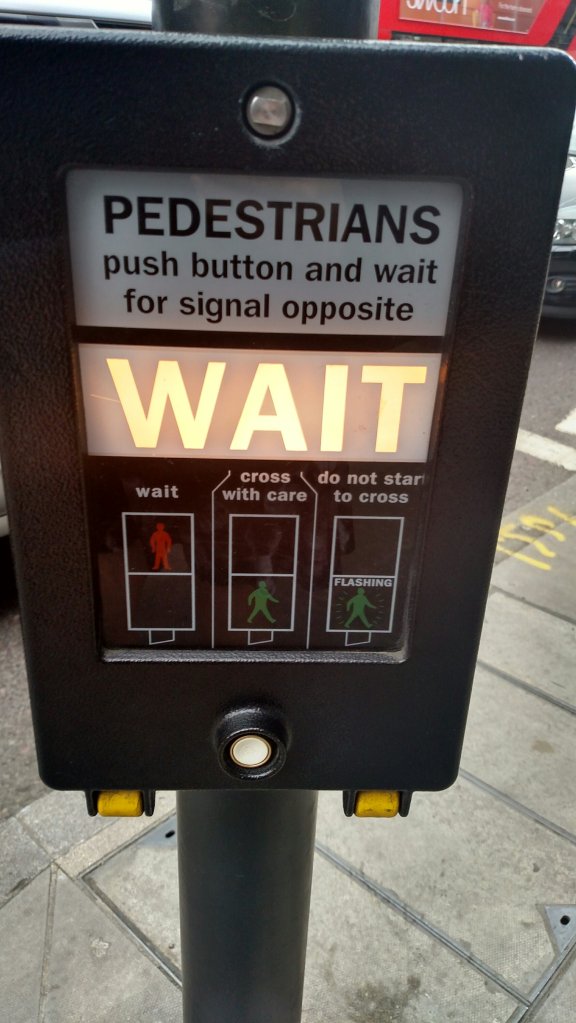 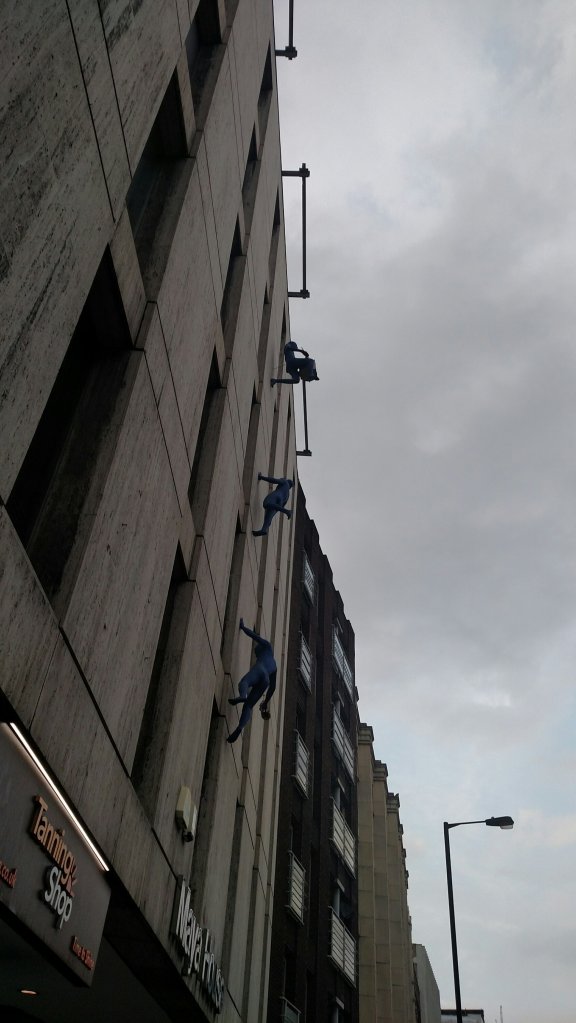 While the dinner was good, the dessert was the real highlight. I had chocolate cake with chocolate ice cream (diet??! hahahaha what diet shush) 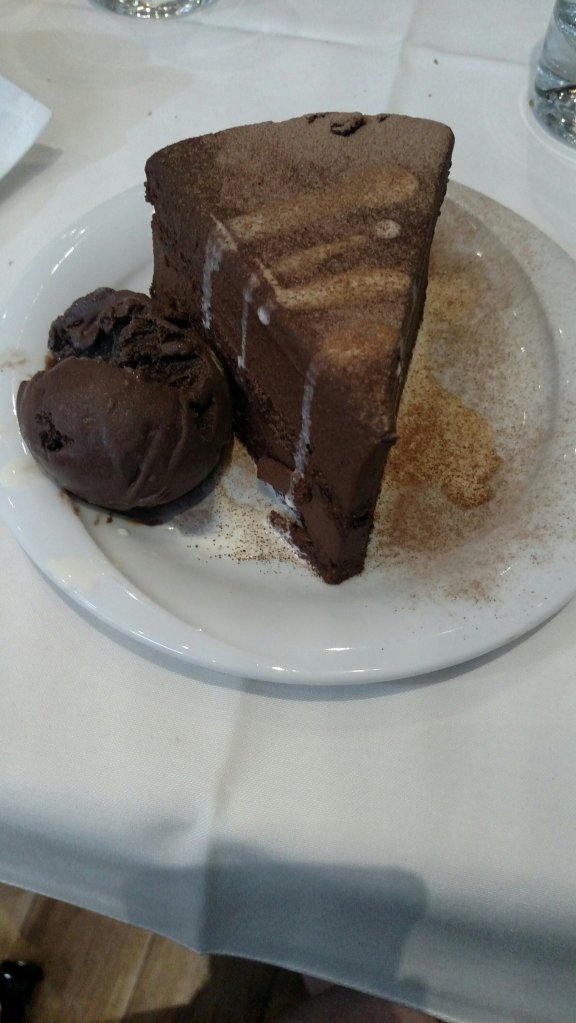 We followed up dessert with a margarita at St. Christopher’s, and called it a night. Emma was leaving tomorrow, which was sad. What would I do without my Disney coworker?!!

Well…you’ll just have to tune in next time to find out. 😉